Bare setting gets a head-turn

I have known the road like I lived there. Just don't let me drive to prove my point, ok? After several years, not much has changed in the General Santos City to Sarangani route - which makes things just perfect. I loved the way it is and a deep wish is to keep it on hold for the longest time. That's a bit selfish of me, I know.

The scenes along the way are breathtaking in their simplicity - friendly locals on motorbikes loaded with farm produce from Malapatan and nearby towns, rusting bridges with interesting characters of their own (there was heavy rain the night before we traveled so the rivers were still noisily guzzling through), the combined blue and green landscapes interspersed with mountains on one side and a dazzling sea on the other. Enterprising farmers sell tuba (native coconut wine) along the road, making me remember how our father Eling (a fierce tuba fan and an expert on making it) would climb several trees with his bamboo tube firmly strung on his back every afternoon to collect it straight from the top. Our car was loaded with the entire family and food in containers to last for a week (we stayed only for a night but the food was gone all the same) but that did not hamper our delight for the attractions past our car's tinted windows on the left and on the right. 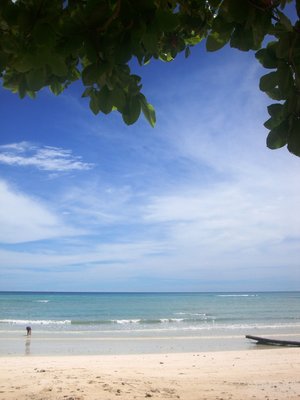 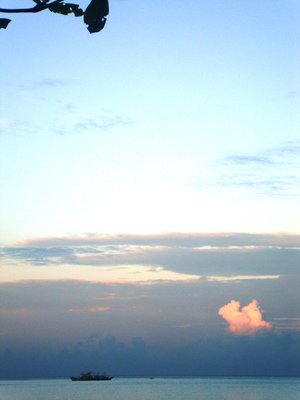 Located at the tip of the Philippines' southern part of Mindanao, Sarangani is a gem awaiting full discovery. If not for travel advisories hounding interested travelers, its long stretch of beaches will give Boracay a run for its money in no time. To bar arguments, that's my own personal forecast. I bet many hands are up! Glan, especially. Glan has become a favorite destination because of its Gumasa beaches courtesy of Sarangani Bay. White sand. Pristine. Unadulterated. No 5-star hotels here but you don't need one when you have the natural amenities for free. Locals should enjoy this while it lasts. This is also part of boxing great Manny Pacquiao's turf now as a newly-elected congressman. All these pluses and more, the beaches are a stand-out winner. 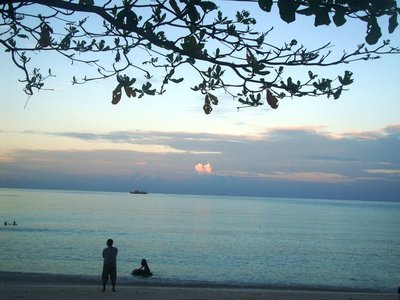 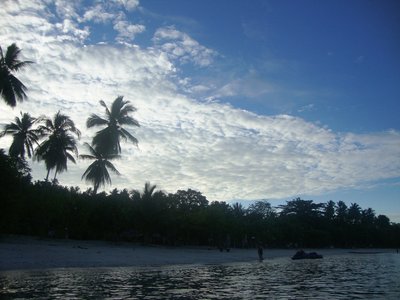 Our first stop was a small resort that looked good on the web. After few phone calls, the reservation was set. When we got there, we decided to check first before we give it a go. Thumbs up we did. It was a downer. Let's not name the poor place that looked like it was trying to get by. Next stop was White Haven Resort. We haven't heard rave reviews about it but after analyzing (yes, even going to beaches on an overnight stay needs serious analysis) that the next resort is still quite a distance, we decided to stay put. It was a make or a break. Mentally, I was prepared for another downer - there goes my brief holiday. It you always get perfect vibes on trips - how can that end up exciting? 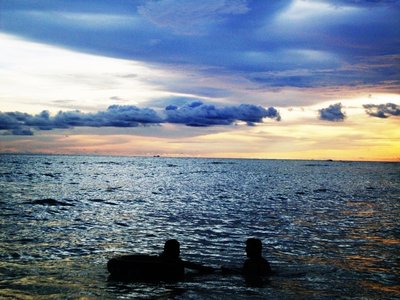 But surprise awaits! We got a tail-end 2-bedroom beach house after waiting for at least over an hour. The receptionist was kind enough to let us stay temporarily at an open cottage where we ate lunch - and feasted on the smelly but mouth-watering durian. The occupants of our assigned house were supposed to leave after an hour but seemed planning to change their minds. We paid the bill and decided not to give in if it happens. Good for them they didn't. For around US$60, we have the jolly little cottage with a grill, a cooking range, a veranda overlooking the beach and all its wide-expanse, a large bamboo table with long wooden benches that can double as beds when you do not feel like soiling the bedsheets. One of the rooms is air-conditioned and it was good to have a choice when it got warm at night. 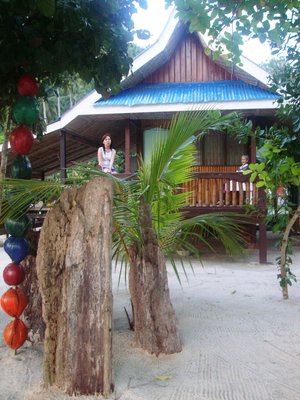 So, White Haven lived up to its name. Perfectly. I am no beach bum but it was one of the very few times in my life (Phuket, Mombasa and Bali included) when I stayed on the water up to midnight, strong waves (and biting jellyfish) notwithstanding. That does not make the other beaches less enticing but being a Mindanao native makes the heart more biased I suppose. Sunset was a glorious sight (you might have read this pronouncement somewhere but cannot think of a better phrase to describe what I saw)! My 72-year old mom happily concurred - you have to take it seriously. She does not agree easily - it took a lot of spins to market the family holiday on her - and take her off her rocking chair at home.

Sunrise was heavenly. I mean almost literally - with soft clouds dotting the skies. We uncomfortably laid down on our backs and tried our niece's way of looking at the sky - it was surreal, like having your bedroom ceiling in soft blue and white - only on this one, sky is the limit (pun intended). I do not know how these two sights found one place for an open exhibition. But they did.

Then came the local vendors where we bought fish for breakfast - so straight from the sea goes the newly-caught to our waiting charcoal grill. I cannot also imagine (poor in Math that I am) how all the food crowding in the car got lost in seven tummies - not counting the ones we bought along the way and those from the vendors. That is a mystery that better remained as one, I guess.

This is what we did last summer. Just the beach and us. But it will always remind me of one good reason why I need to go home to the Philippines every time there is a chance - even at the smallest of excuses. After several years of traveling - 17 countries and counting - there is certainly no place like home. 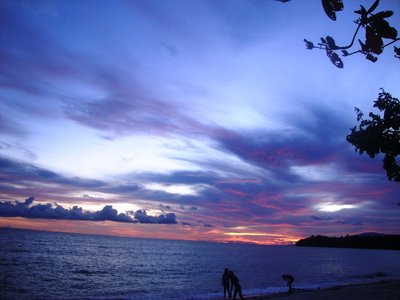 Previous Next Table of contents

right choice...really, there's no place like home....i love the article....way to go!

its time that the Dept of Tourism MUST market Sarangani as one great place to go to ...there must be support though to develop the places further ...security must be given topnotch priority

have been to these places mentioned ...proud to be from this place ..thanks Cec for one wonderfully written article bout Sarangani ..very much timely